On Flying: Why Getting High Wouldn’t Be So Dope After All 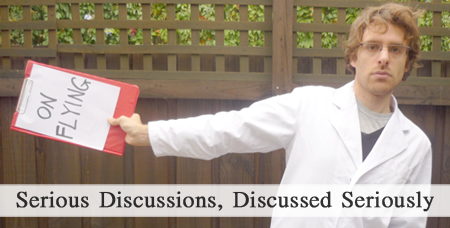 It is only natural for humans to want to fly. The human desire to move beyond the laws of gravity and take to the skies is the business of all pilots, astronauts and motivational speakers who talk in metaphors. And there are many more of us who would like to make it our business. Most of us have, at point or another, wished for the ability to fly without the use of planes, rockets or super-strength spider-webbing. As children you may have actually tried to fly, running around the backyard and attempting to ‘take off’. And, unless you were Peter Parker, you would have frustratingly remained grounded. Nevertheless, many of us continue to dream about flying and still wish for the power to zoom about in the air.

But I don’t believe that flying would be such a fantastic thing. Sure, you would get that instant feeling of freedom as your feet left the ground and you watched the world shrink under your shoes; but things would get bad pretty quickly after that.

For one, it would be cold. Really cold. The first layer of the Earth’s atmosphere is called the Troposphere and it stretches from the ground up to around ten kilometres above sea level. So assuming you did suddenly one day acquire the ability to fly, you would find yourself soaring around in the Troposphere – which might sound like a mid-air amusement park, but is actually a place that gets 6.5° Celsius colder for every kilometre higher you go. Plus the faster you flew the more the wind chill factor would increase and you’d probably have to put a windcheater on. And you would soon encounter clouds, which are the bitumen of heaven in cartoons but in reality would probably be more like walking into a meat locker wearing nothing but eatable ice-cream undies. You would very soon be missing your warm bed blankets. And possibly your toes, should frostbite set in.

Then there would be the issue of flying positions. Flying in itself is a glamorous thing and you could expect to gain extra ‘cool’ once airborne (unless you are wearing that windcheater, of course). The flying process would involve you shooting up into the air ‘elevator style’ (i.e. head first) and then moving yourself into the ‘superman position’ (i.e. parallel to the ground with fists out in front). Except that it probably wouldn’t work out that way. You would still be bound by the laws of gravity in the Troposphere and getting into the ‘superman position’ – let alone maintaining it – would be almost impossible. Most likely you’d end up flying in a position that resembled a child hanging over a fence on its stomach, except without the fence. 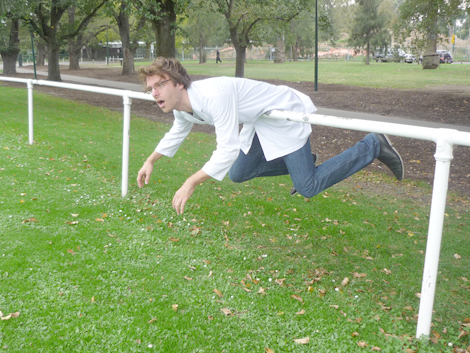 As I demonstrate here… 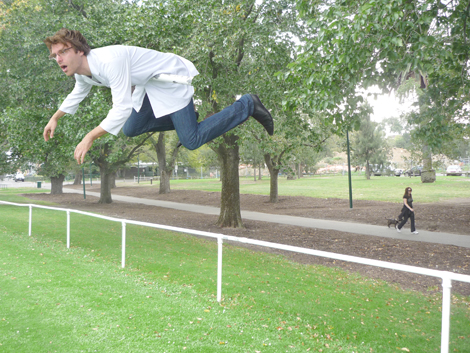 …this would not be a glamorous way to fly.

However, the most compelling reason not to go flying is that it is – in fact – illegal for a person to go flying.  All things that fly – planes, balloons, blimps, even hang gliders – need licences to do so. The Civil Aviation Safety Authority (CASA) rules the skies in Australia and they basically ensure that no one goes up into the sky without the CASA knowing about it. Since radars are already capable of showing birds in flight, detecting a human in the sky would be simple enough. Especially if said human was flying in the shape of a child hanging over a fence.

And so you see the dangers, discomforts and fashion perils of human-only flight. It is not my intention to ruin childhood dreams, but we must let go of that desire to fly. Move on.There are other things that need now to be considered. Like how can we make ourselves invisible? Or how can we imbue ourselves with X-Ray vision? And do people who sell trench coats on the black market keep their illegal trench coats on the insides of their trench coats?

End of discussion (unless you would like to leave your own thoughts On Flying below).