Deleted Scene from The Greatest Blogger in the World

Deleted Scenes. They’re bonus material used to pad out the special features of a DVD. We’re always very interested to watch them and they almost always let us down. ‘Oh, I see why they didn’t use that,’ we say. ‘But it’s nice the producers put it on the DVD for us.’

Keeping this in mind I now present a deleted scene from my first, only and bestselling (in Personal Best terms, anyway) novel The Greatest Blogger in the World. This ‘deleted scene’ was originally a character sketch that I wrote during the writing of Greatest Blogger to flesh out the relationship between protagonist-blogger Charlie and his best friend Phattius Beats.

I have given it a light copy edit for reasons of style and grammar, but it is otherwise untouched since I first wrote it. It wouldn’t have worked in the context of the rest of the book, but I did end up using a couple of lines in the final text. 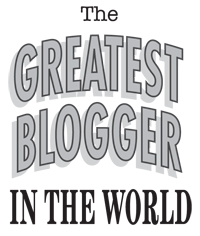 I looked down at the address that Phattius had written on the back of a business card. I was just around the corner from the destination – the Splishy Café. I flipped the card and realised that it was Phattius’s own business card. Phattius Beats – Businessman and Professional Opinion Consultant. So these were what Phattius had been making in art class that day when he said he’d ‘thought of nothing good to make’, despite working hard for hours.

I turned the corner and there was the Splishy Café, right next to the Mr Sploshy’s Hairdressers. Phattius was already seated at a metallic table in the sun out the front of the Splishy Café. I sat down opposite him and put my schoolbag at my feet.‘Good morning,’ I said.

Phattius was sipping at a half-drunk cappuccino. ‘Morning, brother! I hope you don’t mind meeting me here before school?’

‘I would have met you at school but I just had a meeting with my accountant.’

‘Phattius, you have an accountant?’

‘Well, no. He was my dad’s accountant. I was selling him calculators. I got a whole bunch cheap the other day. You want one? Half-price for friends. Plus you don’t have to buy batteries because they work when you stand in the sun or near a microwave.’

‘No, no thanks. What did you want to talk about? I had to leave Joshua to feed Barcode this morning and to be honest I don’t know which of them will end up eating the most duck food.’

‘Well, I appreciate you coming this morning, brother. It’s not every bestie who would come to a meeting before school.’

‘Every bestie? You have others?’

‘I have a new product that I think I can start selling to the kids at school.’

‘Really? Is it more exciting than calculators?’

‘It is, but it’s a bit more abstract. I want to sell Childhood.’

‘Maybe you should stick to calculators?’

‘How often to do you hear adults saying, “Childhood was the best time of my life” or “Youth is wasted on the young”?’

‘The point is that us kids are being forced to grow up really fast these days.’

It was true. Lots of kids from school already had jobs. Cathy Oldbeck did a few hours every week behind the counter of her aunty’s carpet shop, Brent Looter worked at the Trunk Fast Food Restaurant and Rory Corey filled in for his dad sometimes as a security guard at the Schlock Pub of Excellence. That place is the worst. Its slogan is Get Schlocked at the Schlock.

Phattius continued. ‘So how would you feel if I said to you, “Charlie, I have the solution to being a kid”?’

‘I would say, “I’m already a kid, I don’t have anything to worry about – least of all NOT being a kid.”’

‘Yes, but you’re more than just a kid. I mean, how often do your parents get you to wash the dishes, sweep the floors, take your little brother to kinder?’

‘All the time,’ I said, which wasn’t exactly true because sometimes I tell Dad I don’t want to walk Joshua to kinder and he sends Barcode off with Joshua instead. Barcode doesn’t mind – in fact he loves going to kinder with Joshua. Barcode is good at beak painting, he loves going down the slide and he takes to the lawn sprinkler like a duck takes to water.

‘You see,’ said Phattius, ‘apart from school a real kid’s time should be spent playing video games, drinking from the nozzles of slurpee machines and riding around on the biggest dogs in the dog park. You know – kid stuff.’

‘I hear you Phattius, but how exactly are you going to sell this Childhood thing?’

Phattius reached down to his schoolbag and brought back a big pile of papers. He passed the bundle over to me. There were about 100 pages all stapled together. The first page read You Can’t Be Young At Heart If Your Aorta Is Old: 10 Steps for Kids to Reclaim Their Own Childhoods by Phattius Beats. It was a book. Phattius had written some kind of self-help book for kids.

‘So what do you think, Charlie?’ Phattius asked. ‘Do you think it’ll sell? I wrote it myself. Last night.’

‘I’m not sure if this will sell as well as red cordial,’ I said, leafing through the pages.

‘No, no, it’s a good idea,’ I said, and it was. But books are a hassle to get printed and annoying to get into bookshops.

‘But maybe it’s not a book,’ I said, looking up and smiling at Phattius. ‘Maybe it would be better as a blog?’