It’s the most wonderful Book Week time of the year

This week is officially Book Week at schools and libraries across Australia. And Book Week means author visits – which are just as much fun for the author as they are for the kids.

Today I was out at St Francis of Assisi Primary School in Mill Park all day doing sessions with groups of grade 6 students. We were in a small hall as their new library (as seen below) is halfway to completion. The students were all really enthusiastic and creative – which was especially good for the part of the session where we all write a story together. I’ll be blogging the short stories we came up with soon. 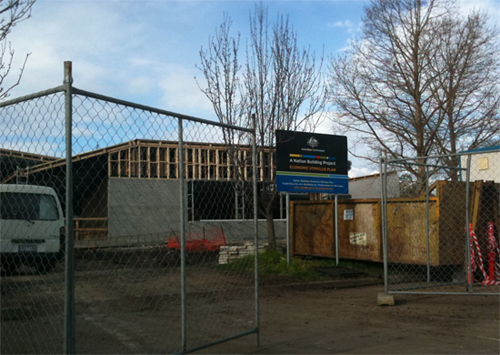 And since it’s Book Week I asked the kids of St Francis of Assisi Primary School to each bring in their favourite book to show and tell me why they like it so much. Book club style! Here are just some of books that were brought in, along with the reasons for their favourtism.

Matilda by Roald Dahl
Because Matilda does what she wants.

Diary of a Wimpy Kid by Jeff Kinney
Because it relates to a kid who doesn’t want to be at school and just wants to have fun.

Alice in Wonderland by Lewis Carroll
Because it has funny characters and weird words like ‘Jabberwocky’.

Go Girl! Dancing Queen by Thalia Kalkipsakis
Because I like dancing.

It’s OK I’m Wearing Really Big Knickers by Louise Rennison
Because of how she wants a boyfriend and how she relates to herself.

Specky Macgee by Felice Arena and Garry Lyon
Because he plays footy and it’s exciting and sporty.

Parvana by Deborah Ellis
Because it shows how other people live in Afghanistan and the Middle East.

Harry Potter and the Deathly Hallows by J.K. Rowling
Because it’s all revealed.

Scorpia: Alex Rider #5 by Anthony Horrowitz
Because he finds out all about his life of spying and mysteries.

Halo: Fall of Reach by Eric Nylund
Because it’s sci-fi and it’s got action.

The Guinness Book of World Records
Because I like seeing people who have challenged themselves.

Skulduggery Pleasant: Dark Days by Derek Landy
Because it has lots of action and mystery.

Hating Alison Ashley by Robin Klein
Because it has funny jokes and it’s soppy.

The Simple Gift by Steven Herrick
Because of the mystery, characters and settings including train carriages, lakes and McDonalds.

New Moon by Stephenie Meyer
Because Bella has to choose between two guys.

Angus, Thongs and Perfect Snogging by Louise Rennison
Because it’s a funny book about a girl who wants a perfect life.

Dear Dumb Diary by Jim Benton
Because it’s about a girl who has bad luck.

Eldest by Christopher Paolin
Because it’s a good book about dragons and battles.

Sadako and the Thousand Paper Cranes by Eleanor Coerr
Because it’s a true story.

Rowan of Rin by Emily Rodda
Because it has adventure and a weird hero.

Captain Underpants and the Wrath of the Wicked Wedgie Woman by Dav Pilkey
Because it has a weird superhero.

Specky Macgee and the Battle of the Young Guns by Felice Arena and Garry Lyon
Because I like footy and it’s fun reading.

Drowned Wednesday: The Keys to the Kingdom #3 by Garth Nix
Because it has interesting characters like giant talking rats.

The Dead of the Night by John Marsden
Because it’s all action, captivating and sucks you in.

Ghostgirl by Tonya Hurley
Because she tries to be popular but she dies.

Harry Potter and the Philospher’s Stone by J.K. Rowling
Because it’s Harry Potter!!!

The Fall: Seventh Tower #1 by Garth Nix
Because it’s set in a different world that no one’s ever heard of before.