I was raised in an outer suburb of Melbourne called Watsonia. The only real thing of note in Watsonia is the Simpson Army Barracks which began life as the Watsonia Military Camp in WWII. Apparently there’s lots of communications equipment at the Army Barracks which means that if Australia is ever invaded Watsonia would be one of the first places likely to be bombed. At least that’s what I think I heard some kid at school say once.

Apart from the Army Barracks and the Watsonia Library – be kind to your local librarian – there’s not much else happening in Watsonia. Although the sight of Jenny Macklin MP campaigning outside the Watsonia Bakehouse during election times is worth visiting town for. If Watsonia was my biological father then I could be said to have Daddy Issues. 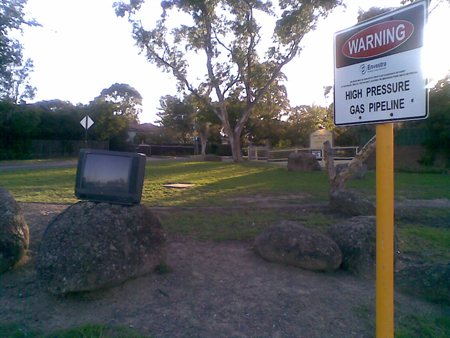 It was sooo Watsonia. I loved and hated and lusted for and wanted to beat that TV on the rock. But I should stop ragging on my hometown now. Thankyou blog for the therapy times. See you next session.