Some words are inherently cool. Like gorgonzola. But some words are not so lucky. Be it through time or an unfortunate circumstance there are some words that exist today that are quite simply uncool. Here, by my reckoning, are a few of them. Feel free to disagree with me or add your own uncool words below. 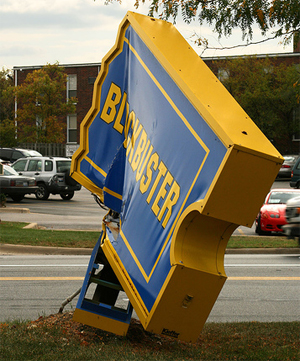 The blockbuster is not what it used to be. And even if it is, it certainly isn’t itself anymore. What I mean to say, is that with Blockbuster (the one time mammoth video chain) heading for bankruptcy in the United States, the word blockbuster has become synonymous with financial ruin, American crappiness and things that your Dad remembers fondly. Put simply, blockbuster = old and uncool.

As such movies, books, TV shows, movies, comics and movies have slowed the use of the word blockbuster as a buzz word to create hype and embed ridiculously high expectations in audiences.

As a result when people describe a movie as being a blockbuster these days, it’s probably just your Dad talking. About Star Wars.

I was using gmail chat the other day when I needed to reply to my sister with some variety of an affirmative interjection. I went for kewl since I’m aware of using cool on IM too much. My lovely sister was quick to dress me down for my choice. Apparently kewl became grossly unkewl around the time Kool Mints stopped being sold in tins.

Anyway, I apologised to my sister and typed lots of parentheses and semi-colons to her and she was happy.

Like they say in writing school, ‘Show don’t tell’. Which is longhand for ‘Never use suddenly’.

Because Kevin Rudd says it.

This one is kind of unfair because this time next year 2010 will be the uncool word. But for now it’s the word 2009 that is associated with things of yesteryear and thus the things of uncool.

‘OMG that is so 2009’ a modern teenager might say. Actually a truly modern teenager would probably say ‘It is so 2009 to say “OMG”’. None the less, to describe something as being very 2009 is to make a very disparaging comment indeed.

The other thing worth keeping in mind is that even when 2011 ticks around, 2009 won’t become instantly cool again. It takes time for these things to regain their cool. Apparently 1983 has been waiting for more than twenty years.