I have my first festival apperance coming up this week and it is très exciting. The Melbourne Writers Festival, no less! I’ll be in conversation with Andrew Finegan about Nerds, Blogging and the Art of Cool. However, I am probably only qualified to talk about one and a half of those things. I think I will argue that blogging has become cool but cool has become nerdy. Anyways, it should be fun. I wonder if I get free ice tea? Probably not.

In other news, Esther from Booked Out Speakers Agency was in Sydney last week and came closer to my doppleganger and general life rival Andrew McDonald, the Sydney Shoemaker,  than I have ever been. Thanks for the pic Esther! 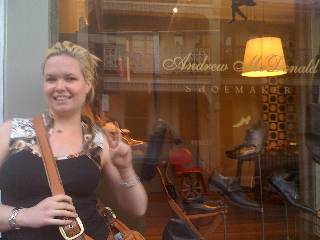 That’s his Sydney shop behind her. There is little doubt that before long the shop will be more popular with tourists than customers.