Judging the ya books of the Victorian Premier’s Literary Awards

I was watching a news report of 96-year old artist Dickie Minyintiri winning the National Aboriginal and Torres Strait Island Art Award last week and couldn’t help but gawk wide-eyed when the cameras showed us his and a handful of other artworks that had been nominated for the prize. They’re currently on display at the Museum and Art Gallery of the Northern Territory and you can view them online too – it’s worth taking a few moments to browse through. They’re beautiful, striking pieces of art and I remember sitting there thinking, I have no idea how the judges settled on one piece of art when each looks to be its own unique and wondrous beast.

And I realised I’d done exactly that myself only a month or so ago when I judged the Young Adult category of the Victorian Premier’s Literary Awards. No doubt judging indigenous art seemed like a herculean task to me because I don’t have the same experience and cultural reference points that I do for teen literature, although Australian YA also had its fair share of unique and wondrous beasts published over the past year.

The actual judging of the Vic Premier’s awards with Mike Shuttleworth and Leesa Lambert of The Little Bookroom was a blast. With so many books to discuss, each meeting we had was like taking part in a book club on steroids. There were opinions flying everywhere, books being waved passionately about in the air and a truckload of fun being had (by me anyway, who knows what Mike and Leesa thought of all my opinions and book waving). 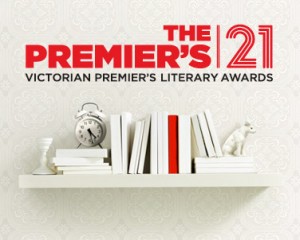 One of the most pleasant things about judging the awards was reading each of the 70 or so books we were sent and for each one thinking: Yep, I can see who the reader of this book would be. It’s for adventurous boys with a sensitive side, it’s for slightly withdrawn girls aged 13-15, it’s for ‘class clowns’ at around 14 years, etc. Not that matching a perceived audience to a book is part of the judging process, and maybe it’s the tiny bit of bookseller inside me, but I found it comforting as I read through the books to match each one up with a reader in my mind.

I read a lot of teen fiction over the course of two months and got a pretty good idea of the spread of YA publishing in Australia at the moment. It was particularly cool to see the rise of the urban fantasy novel, as noted in our judges’ observations, where we were also able to name drop some novels that didn’t make the shortlist, namely Lili Wikinson’s A Pocketful of Eyes, Marianne de Pierre’s Burn Bright, Scot Gardner’s The Dead I Know, Rebecca Lim’s Mercy, Rebecca Burton’s Beyond Evie, Leanne Hall’s This Is Shyness, Ursula Dubosarsky’s The Golden Day and Laura Buzo’s Good Oil. Hooray for all of these books. They deserve to be borrowed from libraries, written on shopping lists and marked as ‘to-read’ on bookwormy social networking sites.

But of course the biggest to-dos must be saved for the three books on the shortlist: The Life of a Teenage Body-Snatcher by Doug McLeod, The Three Loves of Persimmon by Cassandra Golds and Graffiti Moon by Cath Crowley. Three highly original novels, each more than worthy of winning the overall YA award. I’ll be at the awards dinner next month, cheering all three of them on – even though I already know who wins. 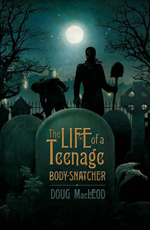 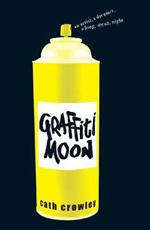