BEDA #4: Freaks and Geeks and me

I think the time has come for me to gush about Freaks and Geeks. Freaks and Geeks was a TV show made for NBC in 1999-2000 about the ‘freaks’ and ‘geeks’ at an American high school in 1980. The show was produced by Paul Feig and Judd Apatow (Knocked Up, Superbad and The 40 Year-Old Virgin) and much of it was based on Paul Feig’s own humiliating high school experiences. But Freaks and Geeks (despite it’s off-putting name) is a killer show. At a Freaks and Geeks reunion panel last year Patton Oswalt called it ‘the best 18-hour indie film ever made’. The concept isn’t new or even close to original but the writing and acting make it compulsory viewing. 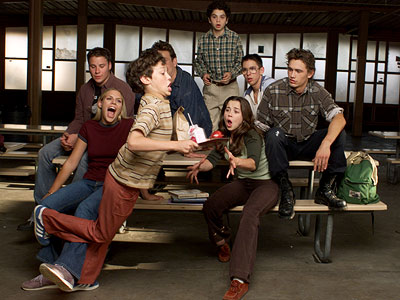 The freaks – an older group of kids who would be regarded as ‘alternative’ these days – are headed up by a cool kid called Daniel (James Franco), but it’s mostly through the eyes of Lindsay (Linda Cardellini) that we view the world of freaks. Linda Cardellini plays Lindsay as the independent-minded girl balancing her recently-new world of boys, drugs and ‘freaks’ with her old world of school, home life and Mathlete friends. However I think it’s the ‘geeks’ that give the show its sparkle. Sam (John Francis Daley), Neal (Samm Levine) and Bill (Martin Starr) are the geeks in question and they were all so close to the ages they play when the show was made that you get the result that the British drama Skins harnesses so effectively: talented young actors playing young people, which leads to an amazingly acted, produced and believable television production.

Whilst the show is often very cute and funny (like when the geeks switch the freaks’ keg of beer with a non-alcoholic keg at a party and everyone still gets drunk on the placebo effect) there’s a lot more going on that. One episode features a plot that sees Bill hospitalised when some kids put peanuts in his sandwich to see if he really is allergic like he says. As he lies unconscious in hospital we get a short scene between Bill’s and Sam’s mothers where Bill’s mother wonders if her heavy drinking whilst pregnant with Bill is the reason that he is the way he is. Pretty intelligent stuff for a show that, on the surface, appears to be just another high school dramedy.

There is no DVD release of Freaks and Geeks in Australia but you know how to get it. And I highly recommend putting a couple of days aside to watch this stunning show. OK. Gush over.