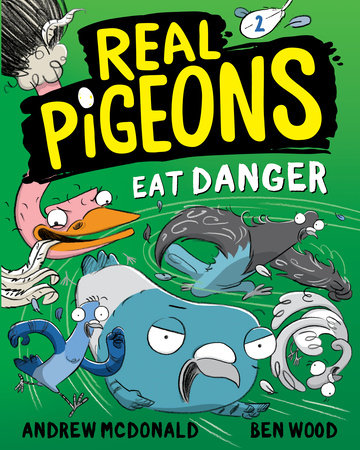 By Andrew McDonald and Ben Wood

But with a deranged ostrich on the loose, a secret warehouse full of bottled birds and power-hungry ibis to deal with, can their friendship survive?

The second book in the Real Pigeons series is a hilariously silly and highly visual introduction to the joys of reading and crime-fighting for readers 6+.

No-one can protect a city like Rock, Frillback, Tumbler, Homey and Grandpouter. Crime-fighting has never been so COO!

Ben Wood is a children’s illustrator. Best known for bringing famed Squishy Taylor to life, Ben creates engaging illustrations that resonate with readers young and old. Ben has really let loose in Andrew McDonald’s REAL PIGEONS series, and has woven illustrations throughout the story in a really fun way.

He has illustrated over 25 books, with several titles being a CBCA Notable in 2016 and 2017. When not in the studio, Ben runs presentations and workshops in schools across Australia. Visit his website.

Andrew McDonald is the author of two children’s novels: The Greatest Blogger in the World and Son of Death. Andrew lives in Melbourne with a lovely lady, some cacti and a complete collection of Tintin comics.