Today I spent a lovely morning down at Alphington Primary School in Melbourne’s inner-north talking to the Grade Threes and Fours about my book, blogging and writing in general.

They were a fun bunch and at the end of the morning we all wrote a little story together. One student – Tom – did a drawing of the hero of our tale and another student – Annabel – transcribed as the rest of us made the story up on the spot. Thanks to all the kids who contributed to the story (which was mostly everyone!) Here it is. 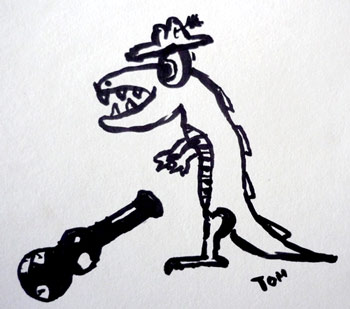 Once upon a time there was a guitar-playing Crocodile who got fired from a band. He had no job now so he had to play on the streets. One day a Mole came along and offered him a job in his band.